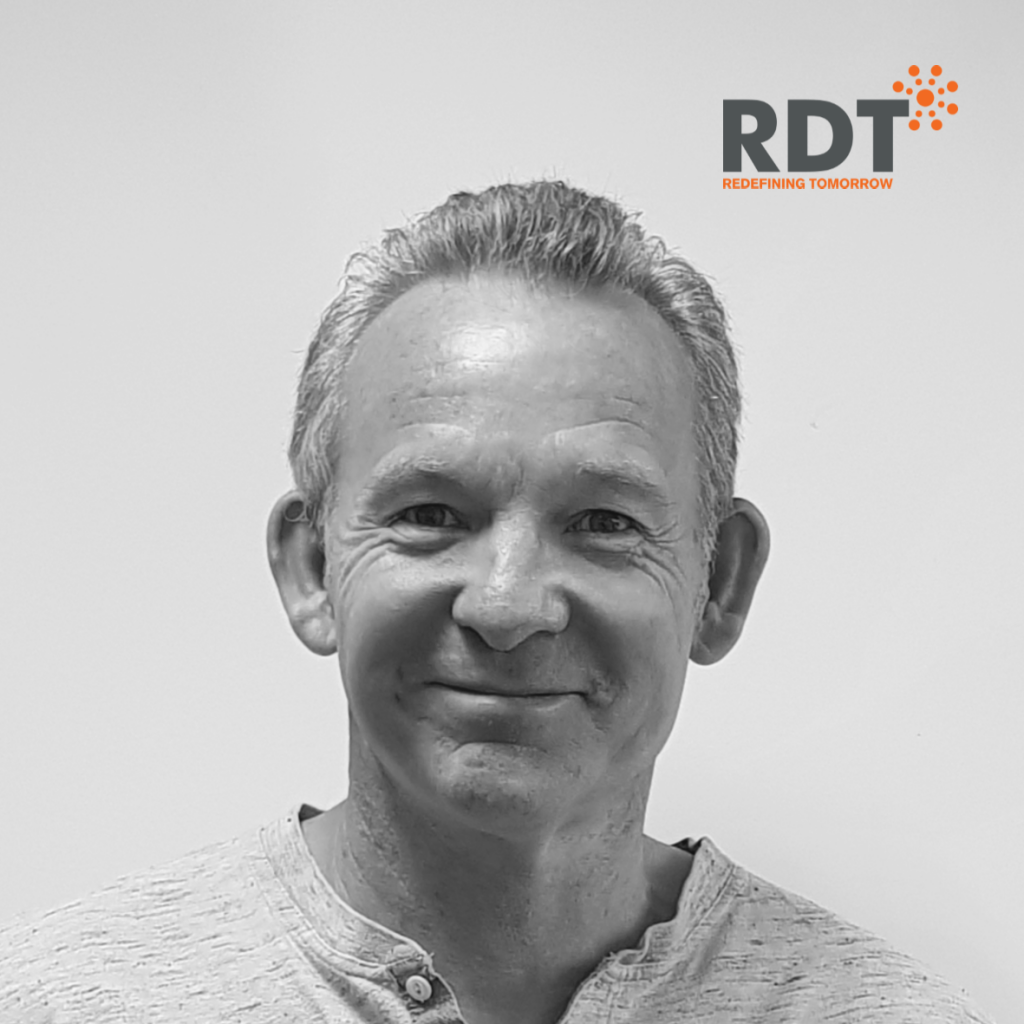 Insurance technology innovation ‘meetup’ group InsTech London have been interviewing CEOs and founders of fast-growing companies for their podcasts, including our very own CEO and co-founder, Mark Bates.

Mark started RDT in 1991 but shows the energy, enthusiasm and tech-driven vision more commonly found in early-stage start-ups. InsTech London partner Matthew Grant met Mark in the depths of the Eight Club and found out how and why he founded the company, what makes him tick, and exactly why one of their clients is responsible for a staggering 50 million calls on the RDT server each day.

Based in several countries and now with upwards of 150 staff, RDT has come a long way since 1991. Mark explained RDT’s origins: “Back in 1991 I was working in software for Bank of America, and was approached by my dad’s business partner who asked me to do a bit of moonlighting and evaluate available systems to run their insurance syndicates. I took a look, and they were all mainframe-based green screen type solutions. I had made a Windows-based solution for the bank, and at the end of the selection process, my dad’s business partner said to me, ‘Really, I just want you to build us something.’”

How do RDT work with clients?

Mark described an evolution; originally RDT provided the platform software, and Markerstudy hosted it. However, for Co-op, RDT is running the platform in the cloud, augmenting themselves into a managed services company. RDT provides the same evolved service to Adelaide-based RAA, who use their Landscape platform for managing their household, travel and motor books. Mark said: “That’s the way we see the whole market moving. I think all of our customers, or the vast majority, will be using that managed service within the next few years, just because it makes financial sense for everybody. And we can deliver change so much quicker to them as well.”

Landscape is RDT’s administration and claims platform. Mark described how RDT have opened up their APIs and functionality for customers to quickly build their own solutions. He sees this kind of openness as a trend shift in approach. He said: “Because RAA have such a big website and they have so many products and information for their customers, they have a content management problem. It’s quick enough for them to build the front end, but then they need a secure way to hook into the back-end administration system, for example, if they wanted to build a First Notification of Loss (FNOL) solution, which they’re doing at the moment. RAA is doing this using our content management system that seamlessly hooks into the back-end system so it can validate the customer. That’s how these platforms are starting to open up and become slicker.”

To give an idea of the scale of hosting activity, Mark reported that one RDT customer runs 50 million or more queries in a single day. These huge numbers are explained, he said, by the way in which potential consumers use aggregator sites – retrieving several different quotes at a time, and within these using slide-variables like Excess. Each adjustment registers in the system as an individual quote footprint and these add up, creating a rich source of buying data. Mark said: “The benefit for the insurer is that they end up with billions of quotes in their big data store that they can analyse to see the way people change things, how they manipulate quotes to achieve a better price. They can use this data to develop, among other things, customer experience.”

One of the key issues insurers and insurtech providers face is innovating alongside legacy systems. Mark said that there are different solutions available which boil down to what he called ‘slick screen scraping and automation’. He added that insurer attitudes to tech are changing, which enables better and faster system development. Mark said: “If you go back four or five years, we were talking to insurers about hosting their systems in the cloud, and everyone thought it was a bad idea. Now people are coming to us saying, ‘This is really good, could you do this for us?’ So there’s been a shift.” Mark identified that a partnership approach is very important, as is decision-maker trust, for a good reason: “There’s so much development going on that we struggle to keep up with it sometimes. So the insurance company or the brokers or whoever it is, they’re really going to struggle to keep up.”

An example of such innovation is TRiCE. In 2017 RDT launched the white-labelled app which allows customers to buy insurance with an absolute minimum of questions. Mark said: “Customers can input their name, their postcode, the last few digits of their driving license, registration number, and data is pulled from multiple sources all around the world to find out about the individual, the vehicle, or the house, or the destination you’re flying to, if it’s travel insurance. It takes seconds.”

RDT also recently launched an Alexa solution. Once the customer has set Alexa up with their insurer – a simple matter of getting and entering a pin – they can ask it insurance-related questions such as ‘When does my policy expire’ or ‘I’d like to register a claim’. The RDT-designed system can also push notifications, for example, ‘Your car is ready to pick up from the repairer’. Matthew tried this, but his Alexa played an Ed Sheeran song when he asked it to ‘find insurance’. “Yeah, it does need to be linked to the insurer first,” said Mark.

How Do You Keep RDT Fresh?

Mark said: “I just love technology, and I love seeing and thinking about the way you can apply technology to change things. I think the developers love playing as well. They like using new technologies, so it keeps them entertained and it keeps them fresh too. We love customers who themselves are forward-thinking in terms of technology and how it can help their business.”

To summarise, Mark was asked to identify a key area for development. He said: “I think interconnectivity. The ability for one system to talk to another, to manipulate another system, is going to become really important. There are a lot of really interesting players. RDT’s big push for 2020 is to make sure our system is open enough to integrate very quickly with those players.”

RDT is an InsTech London Corporate Partner and will be taking part in an event during 2020. Mark explained why RDT became involved: “We love technology, we love working with the insurers, but historically we’ve not been amazing at self-promotion. This works for us on two levels; firstly, it tells people what we do, but more than that, it introduces us to what other partners are doing in this space. InsTech London was an important step for us to take.”

Find out more about RDT here.

The podcast of Matthew and Mark’s conversation can be accessed here.